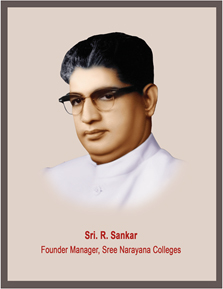 Sri R Sankar, the founder manager of Sree Narayana Colleges was the greatest visionary of his times. By creating more educational facilities, he laid the foundation for new avenues in higher education in the State of Kerala. He was a strong believer of the principles of the great saint, Sree Narayana Guru and followed his ideal of 'Enlightenment through Education', in letter and spirit. Having started his public life as a teacher and lawyer, he talked about the social injustices prevalent in those days, particularly the discriminatory attitude shown towards backward class communities, and the lack of equal opportunities for backward classes
Apart from his contribution to enhancing education in Kerala, he was also a strong willed politician, administrator, orator, writer and editor. Sri R. Sankar had held the positions of Deputy Chief Minister and Finance Minister in Kerala from 1960 to 1962 and had served as the Chief Minister of Kerala from 1962 to 1964. He was known for his courage of conviction to withstand any opposition. During his association with SNDP Yogam of over 13 years, he served as its General Secretary for over a span of 10 years and President and Chief of the SN Trust. Under his leadership the SNDP Yogam gave emphasis to the field of education and started many educational institutions. Sree Narayana College for Women was established in 1951 for the empowerment of women. SNDP Yogam celebrated its Golden Jubilee year while Sankar was the General Secretary in 1953. Sri R Sankar had also started the Sree Narayana Medical Mission under the SN Trust for giving away free treatment. The first hospital under the mission was started in Kollam, the hospital is also known on his name 'Sankars Hospital' which is now a multispecialty hospital.